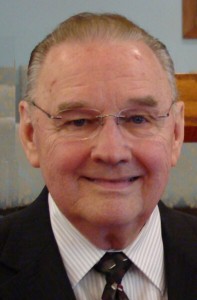 In 1960, Lewis Bridges and his wife, Maxine joined Immanuel Baptist Church in Norman, Oklahoma.  Lewis joined a group of men who preached in various places such as rest homes.  When he was asked to preach, Lewis was led to the third chapter of the gospel of John.  He preached on “Ye Must Be Born Again.”  By Wednesday night the conviction was great and Lewis yielded to the Holy Spirit’s call to receive Christ as Savior.

Immediately, Lewis felt a mandate from the Lord to serve Him.  During the next sixteen years, he attended Garland Bible College, pastored Churches in Nevada, Oklahoma and Texas before going into full time evangelism.

While in evangelism he went on a mission trip to Talapa, Mexico.  There he experienced the Lord dealing with him about training young people in the United States.  With that mandate from God he accepted an opportunity to work with Accelerated Christian Education.  During the next sixteen years he worked for young people and worked with them as well as helping pastors who trained young people.

In 1995 the Wildwood Baptist Church in Tupelo, Mississippi called Lewis to be their pastor.  He prayed that the Lord would help him to reach people for Christ as well as to have a ministry in training young people.  While reading Exodus chapter four, Lewis felt the Lord was asking him, “What is that in thine hand?”  There he felt that God would have him share with others some of the studies that he enjoyed so much.  It is with that mandate from God that these books are joyfully written.