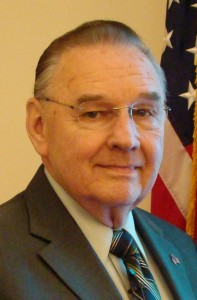 When I was twenty-two years-old, I moved my wife, Maxine and our young son, Barry to Norman, Oklahoma where I went to work at the University of Oklahoma.  We live next to the campus … I loved it … the work was great … I could walk to work … the people around us were nice.  I don’t know how we knew to, but we began to pray about a Church home.  One Sunday evening we went to Immanuel Baptist Church.  As we entered the auditorium the instruments were playing one of the classic hymns, which was upbeat and beautiful.  My heart was stirred as we talked with one of the ushers at the entrance.  I remember thinking, God is in this place.  I really don’t know how I would have known since I didn’t know God nor did I know what His presence was like.

We later joined the Church on the promise of a letter of recommendation from our former Church.  We started going out on their soul winning program as well as other opportunities that became available.  Later, I became the Department Superintendent for the Young Married Sunday School Department and Maxine became one of the teachers.  Since Maxine and I were both in the choir, a group of men [fanatics] who preached at various places asked if we would go to a rest home to help with the music.  We were glad to go and enjoyed meeting the patients there.  We probably had been going with them several months when one of them asked if I would bring the message the following Sunday afternoon.  Before I could say no, he told me all I had to do was make the commitment, ask God to give me the message, and give it like He gave it to me.  I was too proud to say no when it was presented in such simplicity.  I prayed all week but never got anything from God.  On Saturday night Maxine told me something that the preacher’s wife told her that she had heard a preacher say that Spurgeon had said about the Twenty-third Psalm.  The next day I gave that and it was a miserable failure.  On my way out that day an old deacon put his arm around me and said, That is as good a message as could have been given.  Well, Spurgeon had done some pretty good things.  Right there I decided that I would never again try to bring another message, no matter how easy it was to get it from God.

They gave me time to get my nerve up and asked me to preach again, but before I could say no they said, All you have to do is ask the Lord and He will give you the message.  Again, I was too proud to say no when it is so easy to get a message from the Lord.  I went home and took my zipper covered Bible and said, Now, Lord you know what happened last time.  They said all I had to do was ask You and You would give me a message but I prayed all week and didn’t get one.  I am going to hold my Bible up like this and let it fall open and I am going to believe that is where you want me to study for the message.  It fell open to John chapter three and that Sunday afternoon I preached on Ye Must Be Born Again.  I told those people that some of them were trusting in their Church membership to get them to heaven but Jesus said, Ye must be born again.  Some of you are trusting in your baptism to get you to heaven but Jesus said, Ye must be born again.  Men were hollering, Amen!  I remember walking out that day thinking, The key to this whole thing is to be born again … I wonder what it means to be born again.

That week was a nightmare!  I was so much under conviction but I didn’t know what was going on.  Later I learned that it was Holy Spirit conviction.  Now I know!  I was miserable!  I couldn’t get along with anyone and the job I loved so much was a drag.  This went on until Wednesday evening.  After the weekly Bible study at Church, when we bowed our heads to be dismissed in prayer, I couldn’t handle it anymore.  I said, Lord, I know I have sinned and am not worthy to be saved but your Word says that Jesus loved me and died for my sins, so, Lord, please forgive me and save me from my sins.  An awesome peace flooded my soul.  I had never experienced anything like it before.  Sunday morning I made my new found faith public by going forward in the invitation and giving a testimony to the saving grace of God.  A week later I followed my Savior in believer’s baptism.  Thank God for salvation full and free.  Thank God for the opportunity to serve Him!

If you have read this testimony and realize that you have never had such a life changing experience, you can.  Christ died for your sins, was buried and rose again that you too, might be reconciled to the Father.  Receive Him today and the peace of God will reign in your heart and life.